It feels like longer than a week since I arrived in South America! In the last few days alone I’ve been busy…

Sunday, a day of rest including: a delicious meal with my host family and their son and his wife Flor (who got married last year) and Vitalina, Flor’s mother who I work with at Centro Esperanza. Relaxing in the afternoon sunshine on the Peruvian-flag decorated porch overlooking the large school in front of my home. A quick siesta. Attending a youth group meeting with what seems like an enthusiastic group of primary and middle school students who do activities which combine games, art activities and leadership.

A common lunch in Chiclayo, Perú…(what we ate on Sunday)
Appetizer: ceviche (raw fish marinated in lime juice, cilantro and alí chile) with camote (sweet potato) and something like popcorn kernels.
Main dish: cabrito (goat kid), frijoles (beans) and arroz (rice).
To drink: chicha morada! (a naturally purple drink made by soaking purple corn and pineapple with cinnamon and cloves in boiling water and sweetened with sugar)…delicioso 🙂

(On to more serious matters…)>Monday: an important meeting in the morning (at an elementary school) to discuss domestic violence; the campaign is called “Good treatment within families: united family, family without violence”. Representatives from Centro Esperanza were accompanied by the other interns and myself. The meeting involved mothers, about a dozen middle school students and one man/father from the rural suburbs of Chiclayo called “Chosica del Norte”, as well as several representatives of government bodies including the Ministry of Women and police. The meeting was meant as a starting point to generate discussion about the problems at hand in the neighbourhood; women were given the chance to talk about their experiences or present data about domestic violence and then panel responded.

The second part of the meeting involved (limited) discussion time in smaller groups about possible steps to take to find potential solutions to the violence. I went to the room where the middle school students discussed with a teacher (who is a volunteer in Centro Esperanza), but the youth were quite shy to open up to complete strangers about the problems which they face, let alone possible solutions. 21 yr. old Marcela from Centro Esperanza proved useful in moving the discussion forward and in the end the youth suggested weekly workshops to discuss topics including knowledge of their rights as children and where to seek assistance to report domestic violence or/or receive help (counselling, for example).

A follow-up meeting will be held in early August to continue allowing for discussion and educating more women and men about the damage that violence does within a family unit especially psychologically (something only talked about in recent years here) and for children. Those who attended the meeting were told to be pro-active in inviting their friends to the following meetings to increase the effectiveness of the campaign. 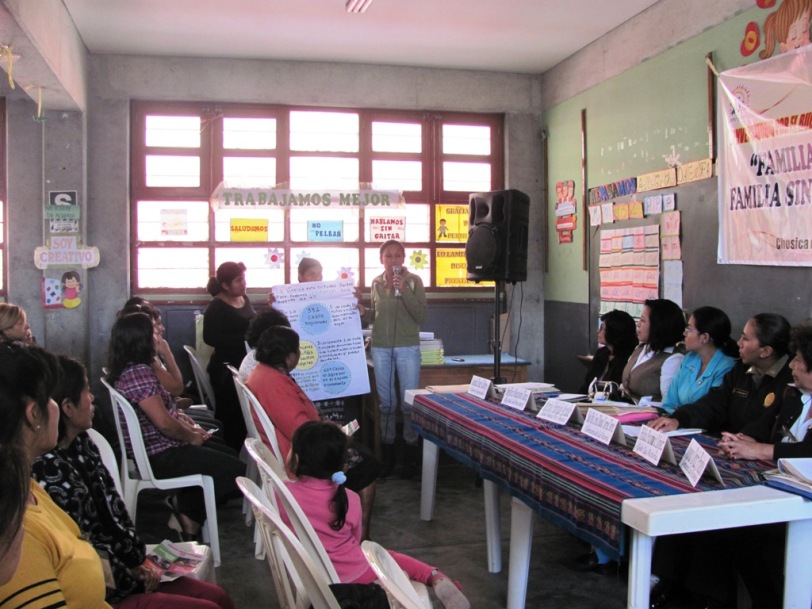 One of the mothers presenting data to the panel and the attendees. 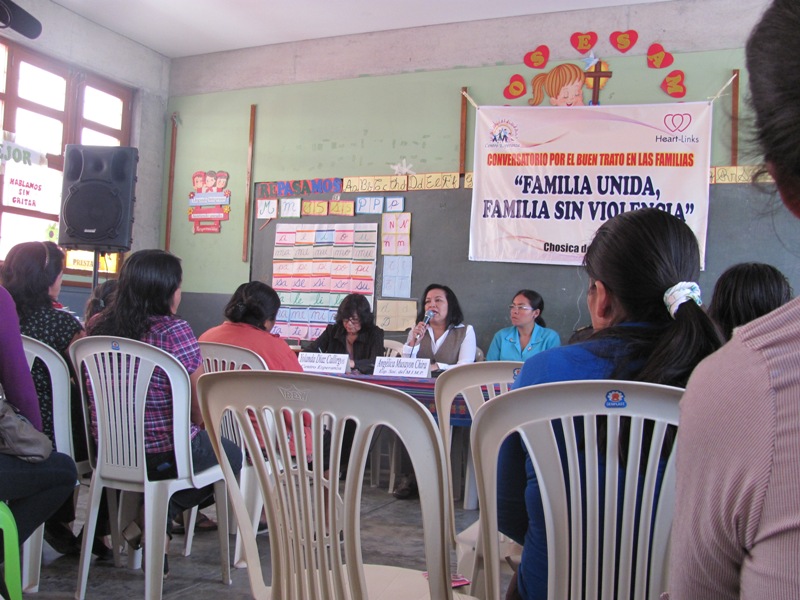 The panel responding to the presentations made by the mothers and Centro Esperanza.
The banner reads:  “Good treatment within families: united family, family without violence”. 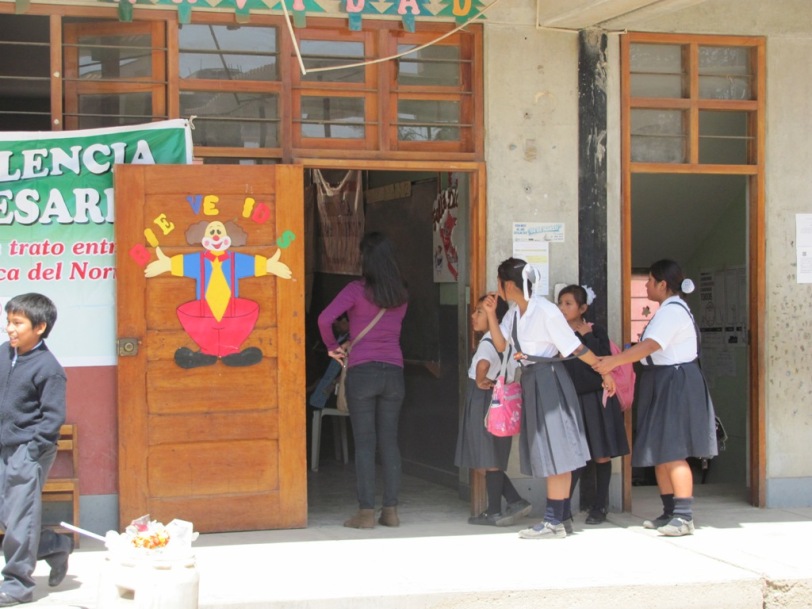 Middle school girls (to the right) listening in on the last part of the meeting.

The “Chosica del Norte” neighbourhood-this is directly in front of the school,
on the other side of the highway that leads south to Lima.

Monday evening: a meeting with some of the key players in Centro Esperanza to discuss what the other interns and I will each be doing (in terms of what programs we would be able to help with and basic scheduling). I will probably start this week by helping out at the youth groups which do various activities on Friday and Sunday close to my house and teaching English classes on Saturday in a part of the city I have yet to go to.

In terms of helping at workshops, we’ll probably start next week once more logistics have been worked out–and we know more about what we are supposed to do! I have offered to help at the music workshops and perhaps painting and drawing ones depending on scheduling and I am also excited to attend the homework help-tutoring sessions with primary school kids.

Today, Tuesday: a useful visit to the “Mercardo Modelo”, one of the bigger markets in Chiclayo where we were given a great tour of the food sections of the market by one of our “amigas” Yolanda from Centro Esperanza. Then I spent several hours in the office at a meeting for the women who organize and offer workshops; today they were discussing the theme of citizenship and the Peruvian national holidays coming up on July 28th and 29th.

In the afternoon I attended a bi-weekly meeting (“Mesa de Concertación”, more or less translated as a decision making round table for the fight against poverty) for a group of leaders in government and NGOs who are trying to reduce poverty within the Lambayeque region of Peru (of which Chiclayo is the capital). Many things were mentioned. for example, Peru is going to host the next UN Climate Change meeting in 2014, which is also the International Year of Family Farming, topics which I read about just a couple months ago for some of my classes. It was exciting to be handed a meeting agenda and folder containing topics which are concerned with the basic family unit all the way up to international agreements, in the attempts to see their interconnections, but focused on reducing poverty at the local level.

“A Respectable/Decent life for all” with the logo for the round table.

Overall I thought the meeting of 6 women and 8 men was organized and productive. At the end we toasted to Peru’s national holiday and everyone said a few words about why we should be celebrating Peru’s independence: for a Peru in which there is more equality; to be a Peru which one day does not lag behind other Latin American countries, but sets an example; to ensure a more prosperous future for “todos y todas” (all people, both men and women; adding “todas”–representing females– is something which government bodies are now conscious of doing in Spanish-speaking countries to promote gender equality starting with daily language usage).

There was a lot of positive energy in the room and I was told that it was not only because of the approaching holiday, but rather, a normal state of optimism at the round table, which has been meeting for 10 years now (since the period of terrorism started to diminish and Fujimori was the president of Peru). Those on the round table are not idealists, but rather, realists who work within government or NGOs are already very familiar with the socio-political-economic realities of their region and country. It was encouraging to have a woman ask me to speak up, to give my opinion, to make suggestions at future meetings in order to help them increase the effectiveness of their meetings, and ultimately, help work together towards reducing poverty.

Another very friendly woman was also encouraging: she is half Peruvian and half Mexican and just returned to Peru after 14 years of living in Mexico’s capital (there seem to be many links between the two countries for reasons which I am still figuring out); she made me smile inside with her recognition of the fact that it is important to observe what is happening in the rest of Latin America without overlooking the importance of understanding what is going on at the most local of levels in Lambayeque, Peru. Her connection with Mexico–including her accent and her Yucatán Peninsula embroidered shirt–also made me think of all of my friends and former host families in Mexico as I begin this new adventure, a second Latin American experience.

One thought on “1 week in Perú”