What mattered today was that the kids whom I did my best to help with their homework were (for the most part) enthusiastic. The half-dozen kids aged 3 to 9 weren’t aware that their living conditions are different from those of Bety (the high school math teacher who comes to tutor them) and my own; they were happy to have company and appreciated the help we offered. For the older ones, this help included drilling them on their times-tables and reading out spelling words. More patience and individual attention was needed to teach them parts of the alphabet, for me to guide the miniature hand of 4-yr. old Angela, for example, as she traced and then began writing letters, for today the vowels.

I found the kids were quite attentive considering that it was Friday afternoon from 3-5pm and they had just finished their school week. They didn’t get distracted talking with one another and they appeared to finish all their homework. Their distraction seemed to be caused by listening to what was being said to other students; they would sometimes brag that they knew a certain times-table or how to spell a certain word correctly, only to be reminded that (as it was in many cases), they were already a grade or two above the other student in question.

A certain Vanessa seemed to be particularly helpful to her peers, una pequeña lideresa (a little female leader). A little boy by the name of Ricardo demonstrated that the first visit that my fellow interns and I had made to his neighbourhood two weeks ago had not been forgotten: “¿Dónde están sus amigas, las otras de Canadá?’ (Where are your friends, the other girls from Canada?). A little later on he asked if I would be coming for the session tomorrow, drawing and painting, to which I responded, “sí” and then asked him what he likes to draw. And before we all packed up the mini tables and chairs he inquired, ¿Y cuando va a tocar Ud. su violín para nosotros? (And when are you going to play your violin for us?)-Indeed, I did promise that I would play for them one day and accordingly told him and the others that the date has yet to be determined.

What really mattered today was demonstrated through Ricardo’s questioning: these kids are just like any, they have minds like sponges. So when someone promises that they will return or do something for them, they remember. They may be poor and live in the newly formed outer districts of Chiclayo (one which still does not have any running water), but they are just as deserving of the tutoring, health, nutrition and other support services more readily available in the city. I’ll be happy to head out tomorrow afternoon in between (the now dry) rice patties in a moto-taxi with art supplies which will serve as a medium to unleash the true creativity and original ideas of these fantastic kids (things I wasn’t fully able to witness today in between their academic studies). I’m excited to give them the attention, patience and love they deserve and begin helping them learn to express themselves through art.

Technically the rural neighbourhood I spent time in this afternoon (La Ladrillera) is just outside the city limits of Chiclayo (denoted by the white dotted line), as are many of the other locations where Centro Esperanza offers programming. 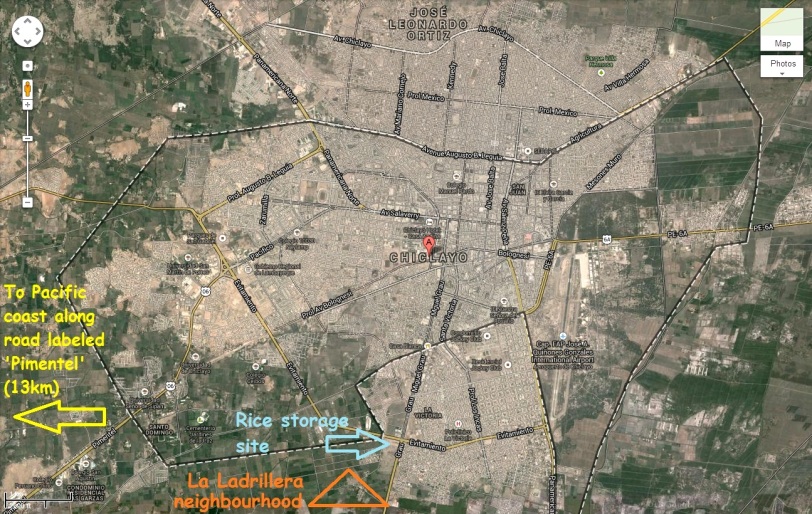 2 thoughts on “What really mattered”