At last I write again; it feels that there has been no time to sit and write a good post in ages, but it is no surprise because my fellow Centro Esperanza staff and I have been very busy. As I mentioned in my last post, the ‘Artesanas por la Vida‘ (‘Artisans for Life’, a ‘co-op’ being supported by Centro Esperanza) was to receive training sessions from Canadian university students. Indeed, at the end of August, three young women, two undergraduate students and one recent graduate of St. Mary’s University in Halifax, Canada, arrived to offer these sessions on behalf of their branch of ENACTUS Canada, an ‘entrepreneurial’ university student group.

Victoria Blue, Mai Miyano and Anna Ferguson proved to be an energetic team eager to offer four afternoons of workshops to the artisan women (including one in which we went out with the women to ‘test the market’) as well as an additional session for women in another Centro Esperanza group in the town of Chosica del Norte. 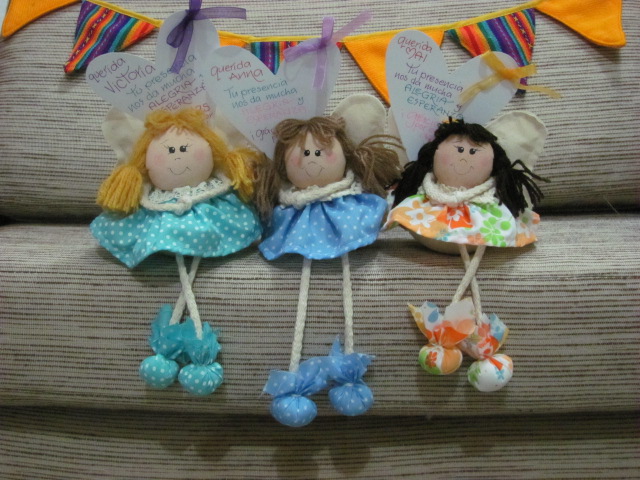 (These cute dolls, given to our visitors from Canada, are a new product that the artisan women have begun making. I have been supporting them by painting the faces on the dolls, but this afternoon I will be teaching them how to do so themselves).

The series of workshops was named ‘Cada Pieza Cuenta‘, or Each Piece Counts, with the idea each woman in the co-op matters, that every opinion, idea, suggestion is important. After all, it is the combined skills, enthusiasm, drive and hard work of all the women working together that will make the ‘Artesanas por la Vida‘ a viable business. 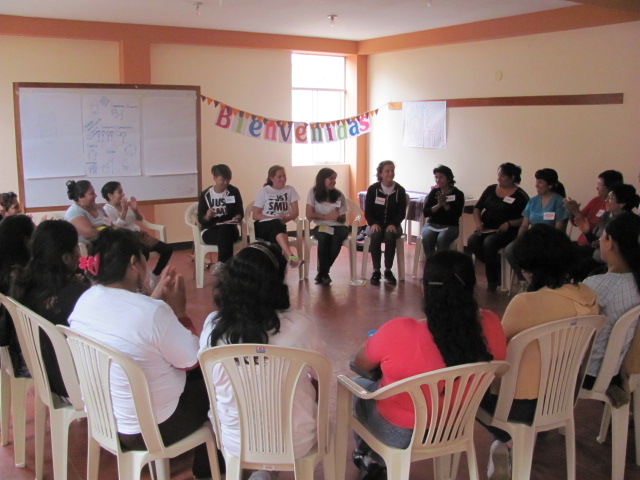 The workshops consisted of easy-to-follow, participatory workshops in which the women reflected on their strengths, recognized the value of being persistent when designing their products, remembered the importance of communication and also discussed the most important factors for the success of their co-op (or other small businesses they run; keep in mind that small businesses are very common in Peru, a country in which the informal economy has a strong presence). As a group, the artisans came to the agreement that the following four things (in no particular order) would be key to the success of ‘Artesanas por la Vida‘; they were encouraged to imagine each once as one of the legs of a chair, without which the chair would fall over.
1) Productos de Calidad : Quality Products
2) Capital / Materiales Disponibles : Capital / Available materials (and not just any materials, but quality materials made in Peru as we are stressing the use of Peruvian materials and supplies, preferably ones which are environmentally friendly)
3) Saber planificar / admistrar de manera responsable : Know how to plan / manage [the co-op] in a responsible manner
4) Motivación / Confianza en si misma y en el resto del personal : Motivation / Trust in oneself and in the rest of the personnel 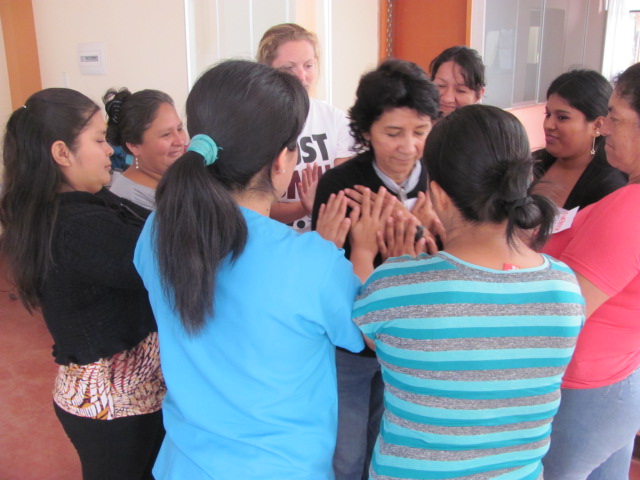 Teresa, one of the Project Chiclayo teachers, is seen here in the centre of a ‘Trust Circle’, in which she lets her body be gently rocked back and forth by her group members whom she trusts will be there to catch her. This simple activity proved to be a powerful tool as a lead in to a discussion about trust.

The variety of difficulties the artisans face were examined in the last two days of workshops. One of the greatest challenges they face is that they lack a suitable place where they can sell their products. While street vendors are visible in every corner of Peru, it is certainly not an ideal sales environment in Chiclayo as products (or their protective bags) quickly become dusty or fade in the sun. On a daily (or hourly) basis, street vendors are ‘kicked out’ from their selling locations and as such, selling in this way is a difficult and undignified ‘battle’ which is not suitable for the artesanas, women who are searching for a more dignified existence as artists of unique, high-quality products. The women hope to have a small stand where they can sell their products for the upcoming holiday season, but dream of ideally opening a store of their own, although they are aware they will need a lot of capital to make either a reality. 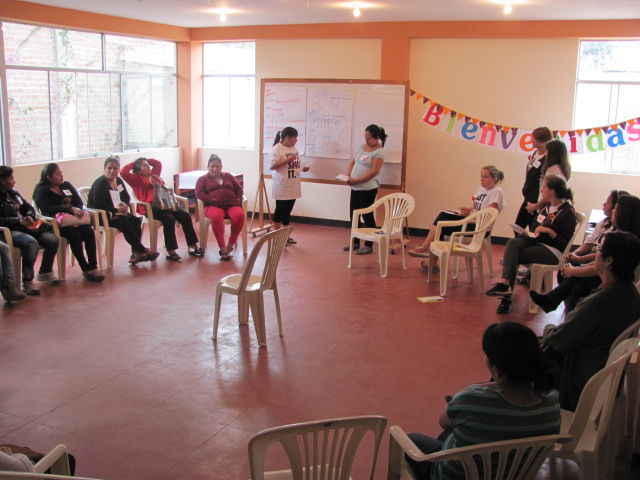 Artesanas Angélica and Kelly can been seen at the front sharing each other’s strengths with the group. 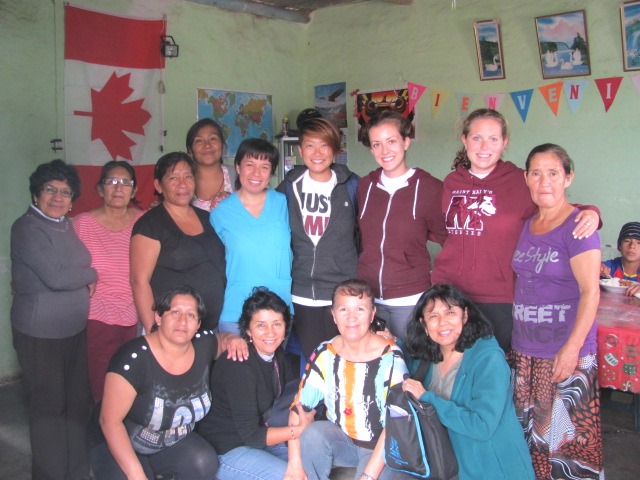 One could make the argument that it is not worth it for foreigners to come from so far away to offer training sessions for such a short period of time as they do not know the local culture well enough, do not speak the local language and do not have enough time to get to know the session participants. Additionally, it could be argued that the money spent on their travel costs alone could be put to better use directly within the programs they come to support. While these are valid arguments, everyone connected to the workshops offered by the ENACTUS team (participants and organizers) repeatedly said that they noted a new energy in the artesanas thanks to the workshop sessions and especially their facilitators: a greater sense of enthusiasm and hope, more willingness to learn and participate actively in sessions, more openness to share their personal strengths and weakness as well as dreams with the group, more willingness to get to know each other better and work as a team.

It cannot be denied that our Canadian session facilitators wasted no time in getting to know the women and they worked on a level and with an openness that created a sense of equality and trust. The artisan women were surprised at how young they were and inspired by the dreams that they have for their respective futures, namely always incorporating community service in their lives and promoting gender equity. There was a sense that these young women were here to work in solidarity with the artesanas and have a true desire to help them succeed. 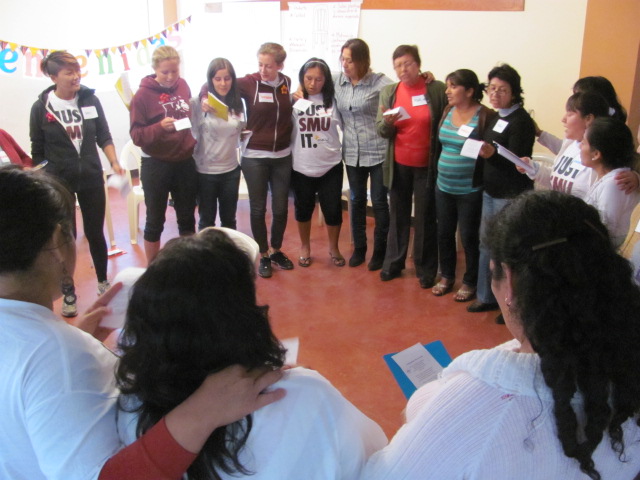 Everyday concluded with the singing of the song ‘Artesanas de la vida’, a beautiful song which talks about women being friends, companions working together to knit their dreams, learning from their mistakes and wise choices; women who are the life that germinates from that which is forgotten and from pain, planting peace and love; women who use a new vision and smile to demand their rights; sisters who build their future, bet on life, justice, hope and equality. As I cannot upload audio files here, to listen to the song open the PowerPoint presentation, press ‘F5’ to view it and click once for the song to begin playing. Artesanas de la vida

There will certainly be innumerable challenges over the next months and years for the artesanas. And if ENACTUS is to continue to be committed, language and cultural barriers will also be in the mix (and let me say that after spending nine days translating, I have a new found respect for translators everywhere). However big the desire of ENACTUS St. Mary’s to help the artesanas, most of these challenges will be faced and dealt with by the artesanas themselves and the Centro Esperanza staff supporting them, as has been the case for many years. Victoria, Mai and Anna created hope and raised the self-confidence of the artisans; indeed, knowing that people had come from another country with the sole purpose of supporting them [the artisans themselves] was an ingredient in the creation of this increased hope and self-confidence. It is now up to the artisans to combine that with their hard work and learn to channel the combination appropriately. With regular communication and committment to learning and working together, the seeds that have been planted by Victoria, Mai and Anna (and future seeds to be planted by their ENACTUS team members) could indeed lead to the blossoming of some beautiful flowers for the Artesanas por la Vida. 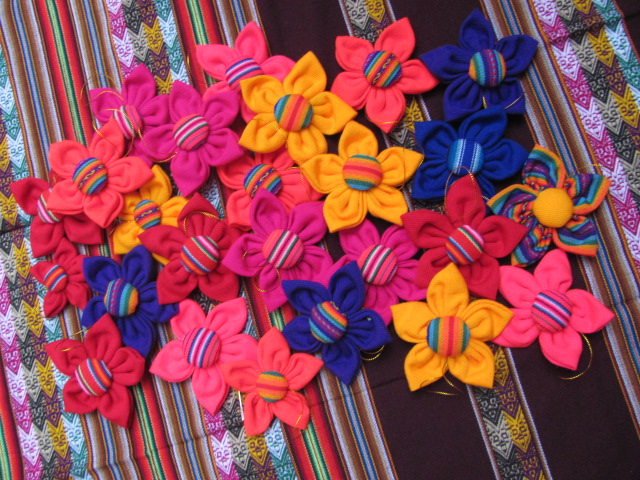 Another new product that the artesanas are producing: decorative flowers made with Peruvian fabrics.