Greetings from sunny northern Peru, where local coffee, sweet fruits and delicious bread are keeping me fueled this morning! I’ve been busy with many different activities and my mind is a bit scattered. Saturday included a baby shower (for a dedicated Project Chiclayo mother), then hilarious karaoke with co-workers and some Latin American classics. Yesterday, I enjoyed lunch and an artistic afternoon with co-workers, washed clothes and relaxed. My other activities include (along with cuddling dogs everywhere I go)… 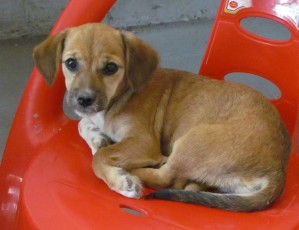 -Drawing workshops with eight children who live in a new ‘albergue’ (shelther/lodging) consisting of four small houses on the outskirts of Puerto Eten. Two families are Peruvian, and two are families of Venezuelan refugees. These kids have had very different lived experiences, often quite tumultuous and unstable. One of the kids is a 4-year-old boy who left his native Venezuela with his family at age one, lived in Colombia for two years and ended up in Peru a year ago. He adores dogs, Spider Man, elephants and playing with a ball with his two older siblings. He also loves climbing and giving hugs.

-Art sessions for children I used to teach (and some news ones) in La Ladrillera, perhaps my favourite program site, mostly surrounded by rice fields. 12-year-old Evelyn wrote via Facebook from the day I arrived, first asking if it was true that I had arrived. She welcomed me, asked when I would visit and (much to my delight), if I could offer drawing workshops. I previously gave many drawing workshops and these village kids illustrated a children’s book, ‘The Perfect Gift‘, as highlighted on CBC Nova Scotia. Evelyn was so helpful, asking all the village kids if they would like to participate and either in the morning or afternoon (there are two school sessions). Evelyn updated me every single day and we did the first weekly session last Wednesday morning from her house for teenage participants. I’ll do another weekly afternoon session with the younger students (who attend school in the morning). Seeing how Evelyn’s leadership skills have grown was inspiring and she proudly, yet humbly, shared that her peers chose her as the youth group leader as she is responsible. 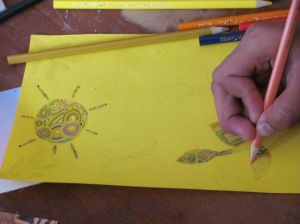 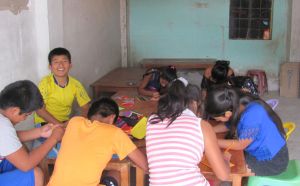 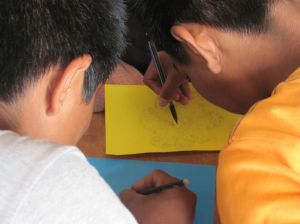 I taught these two boys years ago and couldn’t believe how tall and grown-up they are!
They enjoyed collaborating. 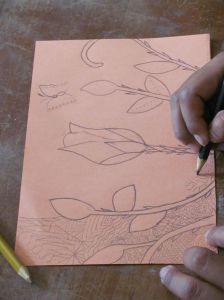 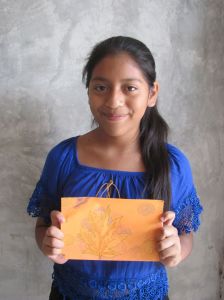 Evelyn and her drawing, inspired by a Canadian maple leaf. 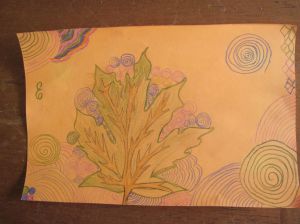 -Card and book-mark making workshops (two days ago, Saturday) with elementary school kids in Chosica del Norte, a small town near Chiclayo, where kids have few extra-curricular educational opportunities. I was at that school in 2013 and was pleased to see the addition of a giant domed roof to cover the entire play area. Kids were fascinated by rubber stamps as they had never seen artistic stamps before (only official stamps to certify documents). They had fun mixing and experimenting with different colours (we used paint), layering stamps and cutting out and gluing their designs to complement drawings for Mother’s Day cards. It was fun to see their excited faces when they lifted the stamps off the paper, and touching to read their sweet words to their mothers. The second session of kids made bookmarks and wrote messages for their mothers on the back. 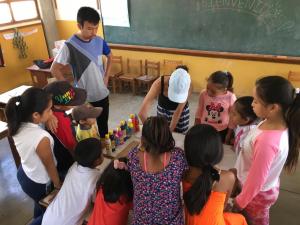 After a demo of how to put the right amount of paint on the stamps,
kids happily concentrated on their creations. 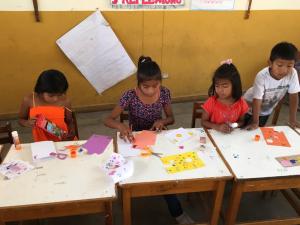 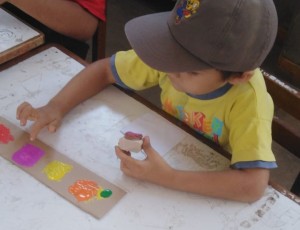 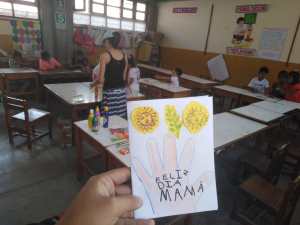 This afternoon, I’ll take La Cometa Lectora (The Reading Kite) to a new program site (Sagrado Corazón/Sacred Heart), with my good friend and co-worker Celeste. Many children didn’t know what a library is in 2014 (when Centro Esperanza launched La Cometa); some of their schools have small libraries, but these kids usually read textbooks published by the national Ministry of Education. The areas where they live do not have libraries. A government website states there are 11 libraries in small regional towns, but the urban area of Chiclayo only has one official public library in the city centre (for a growing population of about 900,000). I can hardly wait to see the excited and fascinated faces of kids exploring colourful books!

Have a fantastic start to your week! 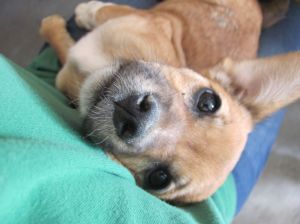 View I had looking down on my lap of Evelyn’s cute puppy Luna, Moon (the same puppy above)
who cuddled for 20 minutes once the kids were independently working away on their drawings.

One thought on “Monday musings on learning, creativity and literacy”