Sharing the magic of Centro Esperanza through play

The days are flying by–here are some photos to sum up my activities for the last few weeks:
Preparing for Centro Esperanza’s ‘Play Day’ (Día del Juego) with kids in the rural community of La Ladrillera. 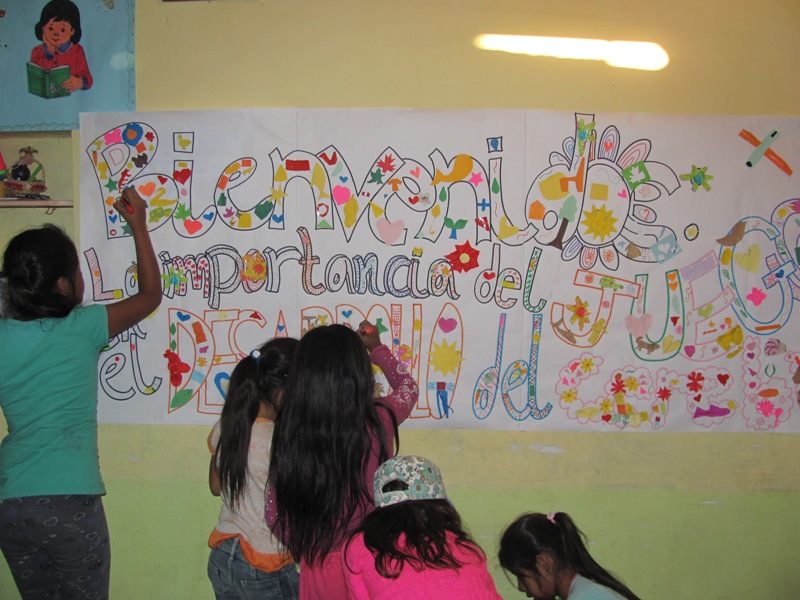 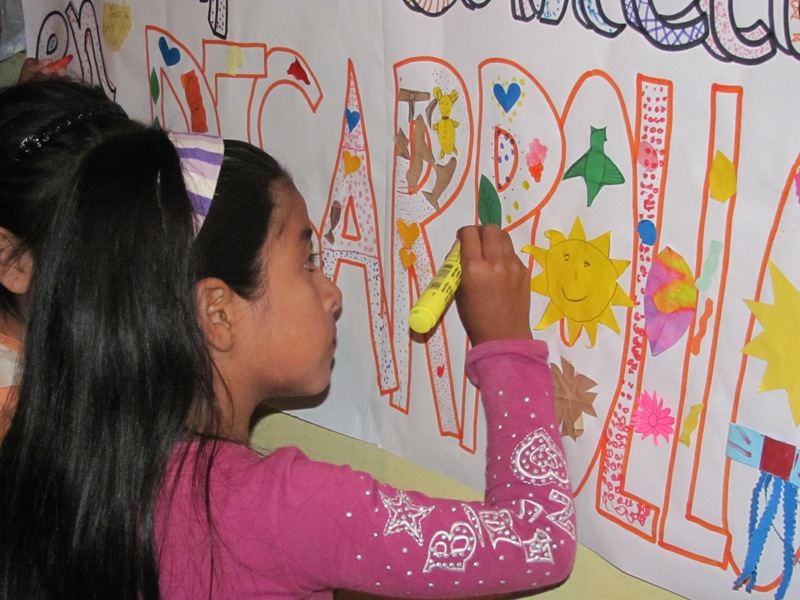 The banner reads: Welcome: The importance of play in the development of the brain and we all had fun decorating it with recycled paper and markers. 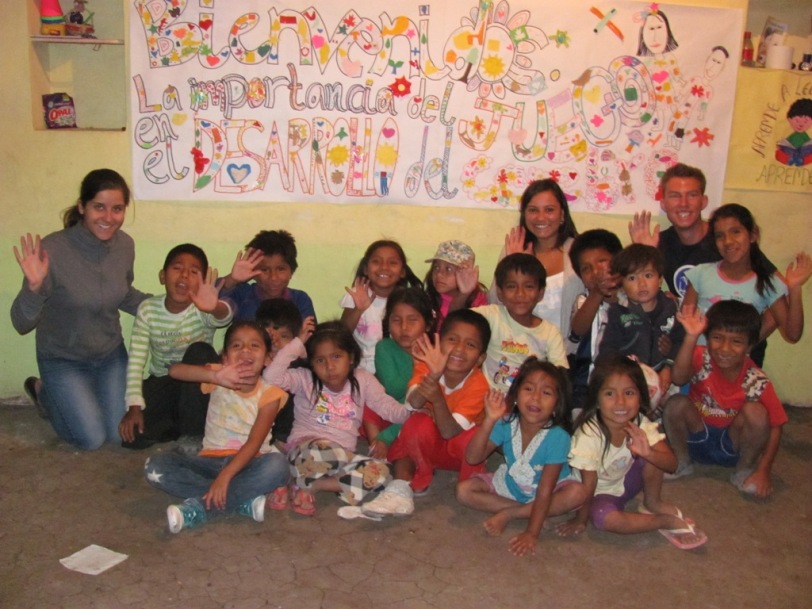 Great news: thanks to a generous donation from Chalice Canada of over $15000 CDN (almost 40000 Peruvian Nuevo Soles), the people living in the rural agricultural community of La Ladrillera will begin to receive water from the city of Chiclayo. Currently, each family is entitled to only 5 buckets of water a week (from a water truck that passes to drop off the water, although not always on time). No distinctions are made between families according to the number of children they have.

I went to the municipality closest to La Ladrillera (La Victoria) on Monday morning to drop off an official letter from Centro Esperanza (CE) announcing that the funds from Chalice have been received and converted and the secretary attentively read the letter and assured me that she would deliver it directly to the mayor, who has found engineers willing to work on the project and promised to begin work on installing the necessary infrastructure ASAP (we all have our fingers crossed). The project is an excellent example of the local and international partnerships that CE is capable of forming and maintaining to make efficient progress that is durable over the long-term.

The following day a team from Centro Esperanza went to the nearest elementary school to La Ladrillera, which largely serves children of families employed in the brick factory, those who farm rice or raise animals such as pigs and ducks. This mixed group of Grade two and three students has five Project Chiclayo participants and it was lovely to see how they interact between each other and their peers. A strong bond was visible between the five of them and between them and their older siblings when we were outside playing at recess. 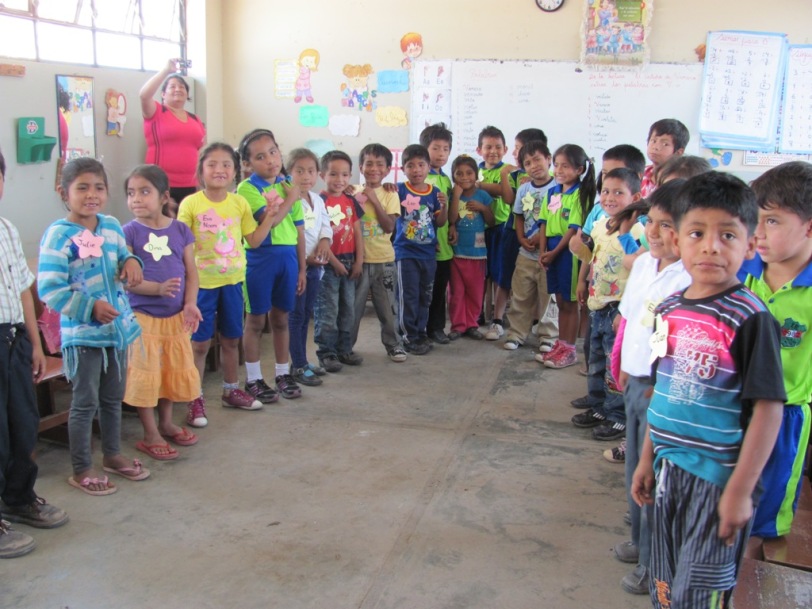 Play Day was about teaching children the importance of play, not only for having fun, but for healthy brain development. Here two enthusiastic CE teachers (Flor and Mirle) were getting the kids warmed up with a cute song about the wonders of the brain. The title stuck to the black board is ‘How wonderful my brain is!’. 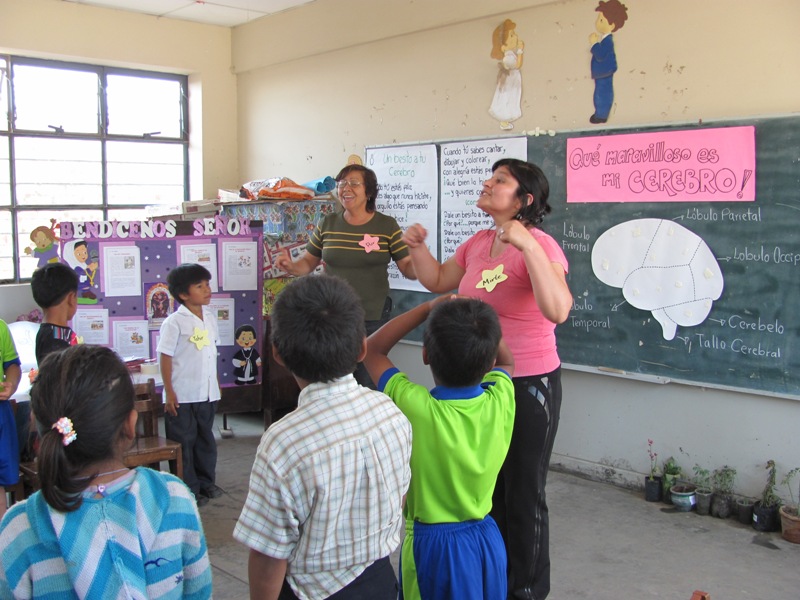 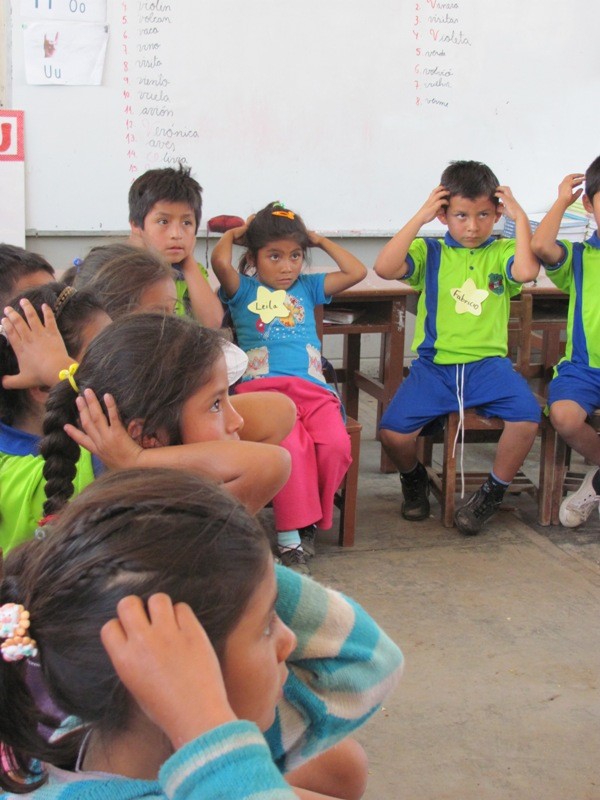 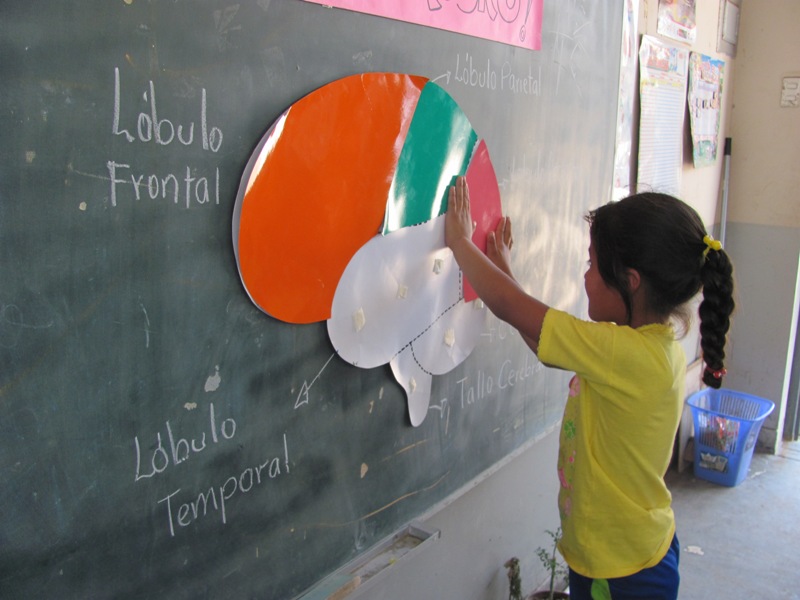 …and then it was time for each one to colour their own two brains. 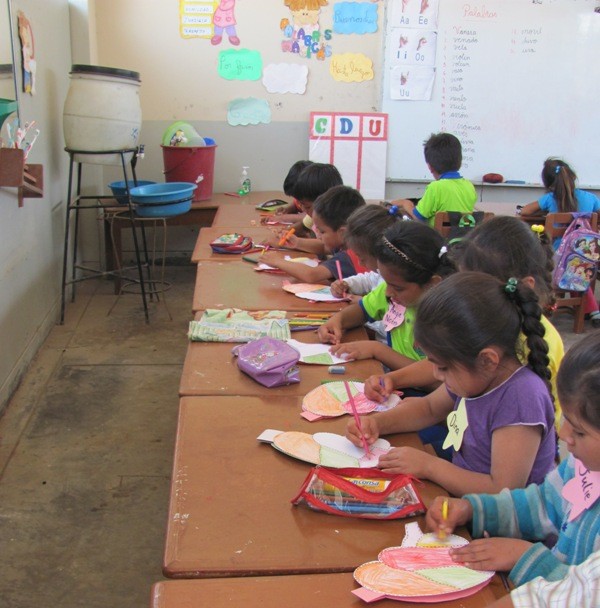 This was followed by story time, a story about dreaming BIG! 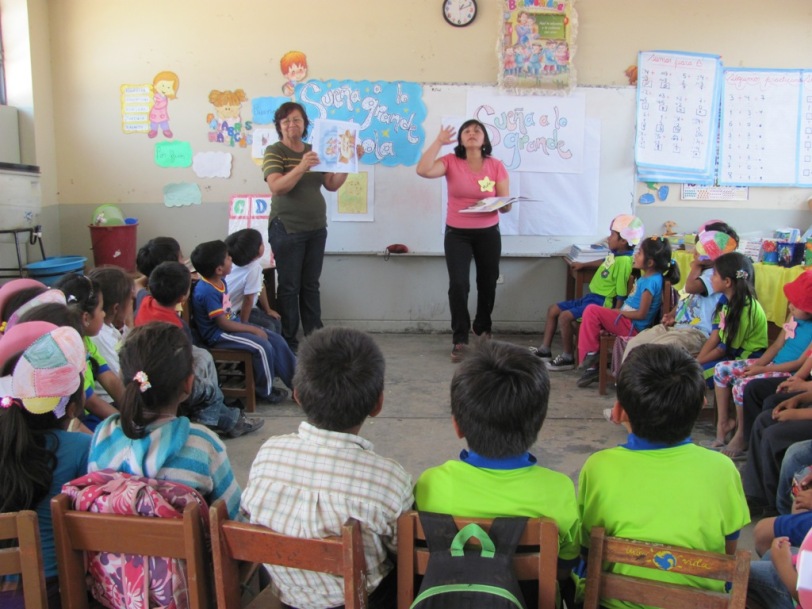 Next each participant shared their dream, focused around what they would like to be when they grow up. Most of the boys want to be police officers and most of the girls want to be doctors. Other professions included singers, a soldier and an artist (Juan, a boy who cannot speak, has this dream and during the session I was pleased at how well he is incorporated into the classroom and included in activities by his peers). 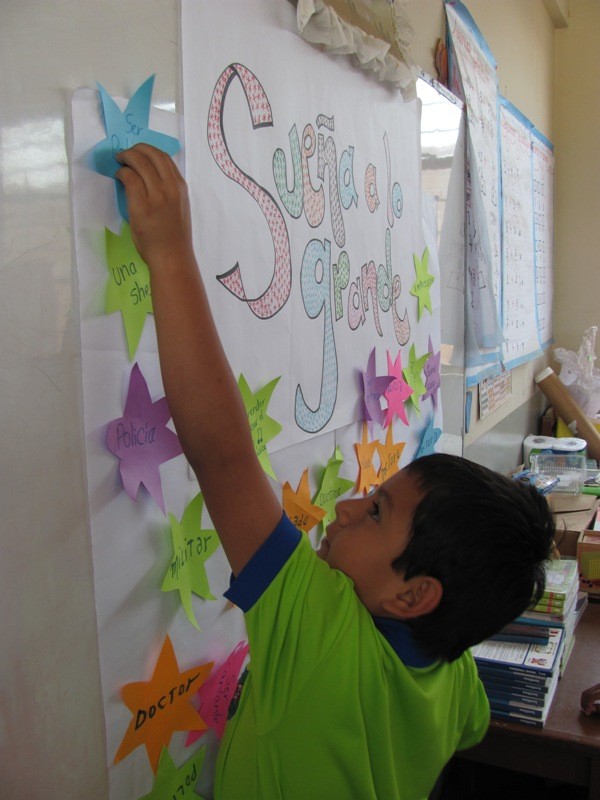 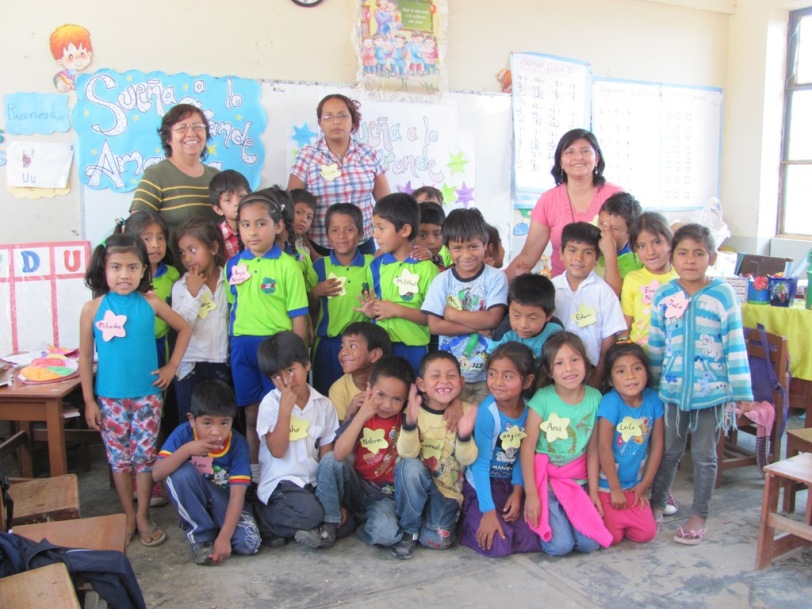 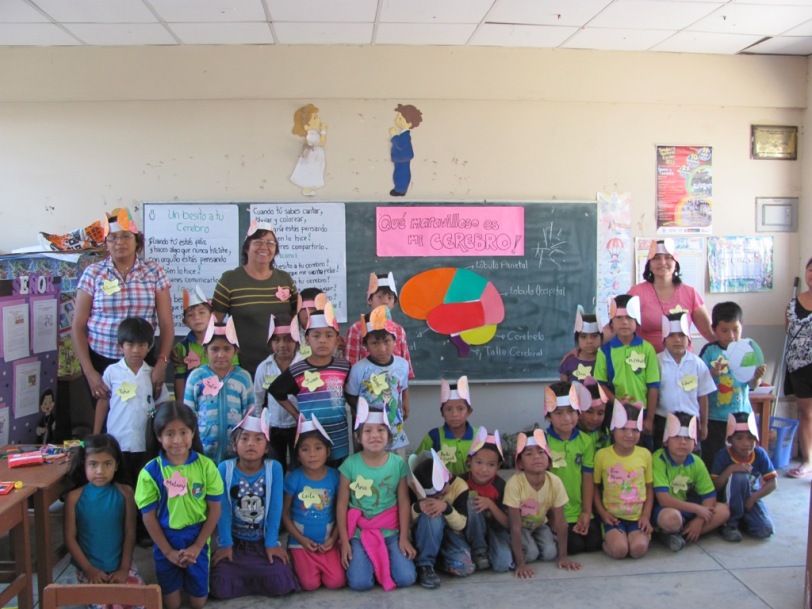 Smiles, playing, learning…mission complete.
And oh how wonderful it felt to share the magic of Centro Esperanza with the community at large. 🙂

3 thoughts on “Sharing the magic of Centro Esperanza through play”