I began the third and final part of my CIDA-funded internship yesterday; it involves only six more weeks of work in the Chalice Canada office where I began back in June before my time at Centro Esperanza in Peru. I am happy about the easy transition back into the office and the familiar faces of the friendly Chalice staff, plus meeting a baby born while I was away!

Some say that coming home after a long-term experience abroad is often harder than leaving in the first place. This opinion is mostly true for me as it has never been too hard for me to leave my family and friends and easy enough to find new circles of friends and settle into a new place, lifestyle, language, diet and culture. I have experienced ‘coming home’ twice before from exchanges in Mexico and France, so I luckily know more or less what to expect. I have only had two full days in Canada and my mind and body are still not in the same place, but I am happy to be in a familiar culture among familiar people.

I certainly did not have a typical ‘re-entry’ into Canada; in between leaving Peru on January 2nd and arriving in Canada on the 11th, I spent 24 hours travelling and a week in Bermuda for my grandfather’s funeral. It was not easy to leave Peru early and I was not able to finish up with everything as I was hoping to or visit cities in northern Peru as I was looking forward to, not to mention simply spend more time with my friends, co-workers and host family. Pero así es la vida (C’est la vie, That’s life!). It was, however, a treat to go to Bermuda, a place which will always feel like home in many ways (more on that–and pictures– in a future post).

Speaking of ‘home’, it is becoming harder and harder to define where that is, since I have hardly been at the home I grew up in since moving from Bermuda in over five years.
*Where I am currently working feels less like home than Chiclayo in many, but not all, ways.
*The university town where I studied beats both in some different ways, but doesn’t outright win.
*The cities in Mexico and France I lived in while on exchange also have their role as ‘home’.

“Home is where the heart is”, n’est-ce pas? Clearly, mine is divided between different places, in different, changing proportions.

I am still noticing lots of little differences between my life in Chiclayo as compared to this region; probably the most striking differences is the lack of noise, although I am staying in a middle-class suburb. I do not miss Chiclayo’s dust, but I do miss sunshine and the general presence of music. I’m sure that when I go to the city centre I will see elements of life that remind me of my urban existence in Chiclayo.

Please join me in reminiscing about my last hours in Peru… 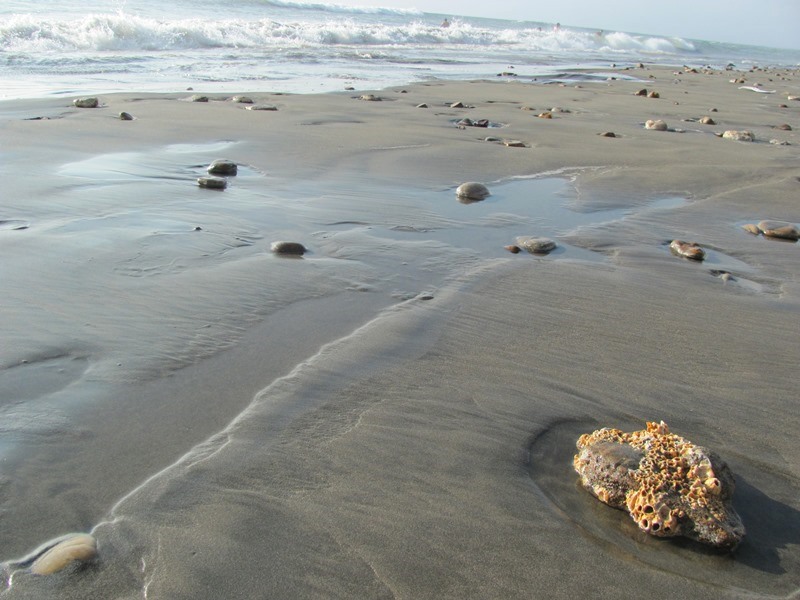 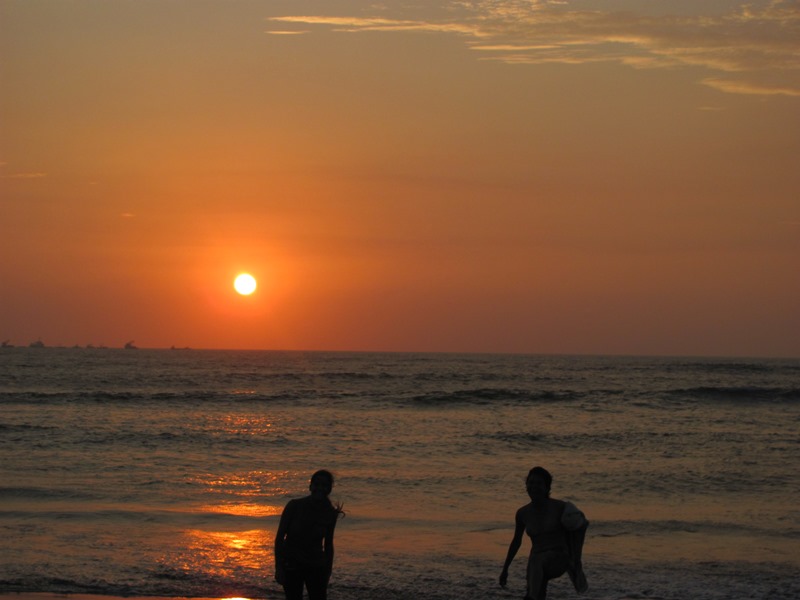 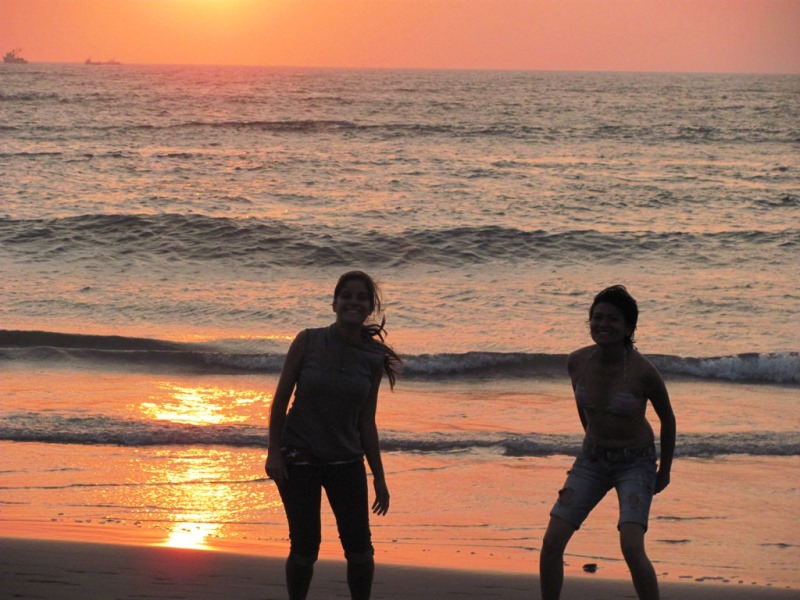 The day before leaving I was very fortunate to be able to spend several hours in the company of two of my closest Chiclayan friends at the biggest beach near Chiclayo, Pimentel, where we enjoyed the colourful sunset. I am currently missing the loyalty, energy, spontaneity and passion for music-making of these friends very much. 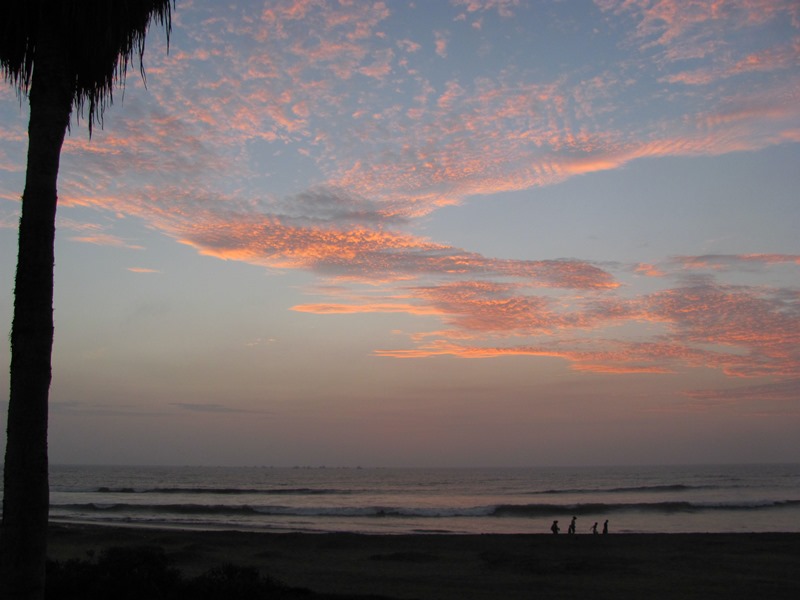 I was not ready to return to the city once the sun had set, but soon after returning to my home, I was back out the door with my entire host family to enjoy one last dinner together, a variety of meats, poultry and Peruvian anticuchos.

What are anticuchos you ask? Well, the debate still exists about whether anticucho comes from the Quechua antikuchu (anti =Andes, kuchu =corte or cut) or if it is a combination of the Quechua words anti meaning Andes and uchu  meaning ají (a hot pepper).

Essentially anticuchos are a popular dish from Peru that consists of  small pieces of grilled skewered meat (widely available in the streets on carts and in stalls, but also the principal menu item of many high-end restaurants). The meat is usually marinated in red wine vinegar and spices (such as cumin, hot peppers, garlic or annatto seeds). Anticuchos can be made of any type of meat, but the most popular ones are made of beef heart (anticuchos de corazón). They were created by African slaves who mixed Spanish ingredients such as beef (which replaced llama meat), garlic, cumin and vinegar with Peru’s native hot peppers. Cow heart and many other innards are still popular  because the innards were what formed the original anticuchos, when slaves were only given the cow innards by their Spanish ‘owners’ on cotton and sugar plantations back in the 16th century. Limited cooking facilities meant that cooking over a fire was common and apparently, sugar cane stalks were ideal skewers. Neat (clearly I am just informing myself about this dish as I write). 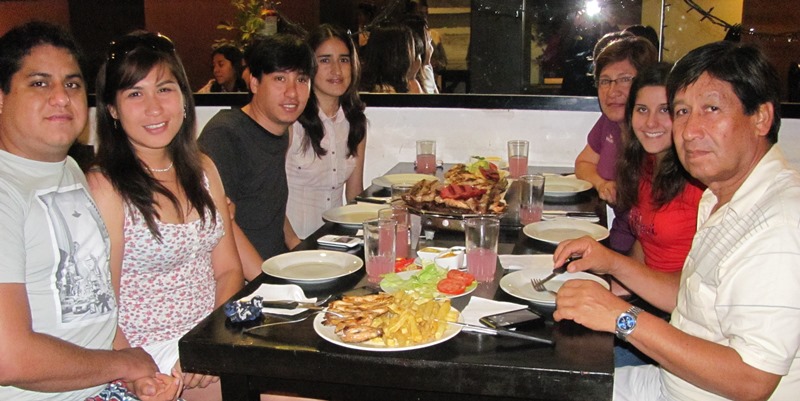 The following morning I headed to my boss’ house for some last time in the company of her family and a couple of my co-workers over a delicious Peruvian breakfast. The sun was strong and the temperature high, but that didn’t stop my host mother from cooking a big lunch of perhaps my favourite Peruvian meal: ají de gallina. After finishing my packing, I spent my final afternoon with a good friend, in which we remembered the good times we had shared and discussed our respective plans for the near future.

The time to board my evening flight came all too soon, but I was delighted to have a small crowd at the airport to see me off: my host family, some of my co-workers (I said hasta luego–‘until then’, not goodbye forever— to the rest on New Year’s Eve at an early birthday celebration they organized) and my closest friends. I had shed tears at previous despedidas (farewells) and I somehow resisted the urge to cry. In addition to everyone there telling me not to worry about leaving because I’d surely be back soon, my heart was telling me that they were right, and clouding my thoughts was the expression that, “Where there is a will, there is a way.”

* * *
I was delighted to chat with my host sister last night–I almost felt like I was sitting in the living room chatting with her. As usual, she made me laugh and smile and told me I better be back in Peru by April 12th for an important event connected to marriage. Hmmm… 🙂