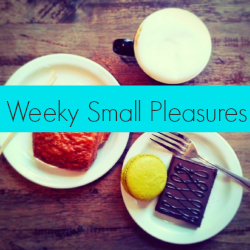 This is actually a perfect week to participate….¿Listas?/¿Listos?…¡Vamos! (Ready? Let’s go)…

1. A Peruvian public holiday on Monday (although I did work on translations and a video from home). It was the day of La Virgen de la Inmaculada Concepción, which is Chiclayo’s Patron Saint. I attended the mass in the central cathedral and while I’m not Catholic, let me say that the sheer number of people and energy in the cathedral were quite something, as were the voices of the choir in which a friend sang.

2. After mass, sitting on a bench in the city plaza with the friend (a bass singer and a violist) who had sung in the choir, catching up on life and sharing ideas about different types of trees that could be planted by the NGO (Centro Esperanza) I work at, as part of our tree planting campaign.

3. Hand-washing clothes before work on Tuesday morning and hanging my clothes in the sun and having them dry before I left for work. (Summer is here!)

4. 9am on Tuesday morning: The first ‘outreach’ visit of Centro Esperanza‘s ‘La Cometa Lectora’ (‘Reading Kite’) program: a visit to a Grade 2 class at a (low-income area) public elementary school with a suitcase full of books!

a) I loved that I already knew the teacher whose class we were invited to attend; she is a long-time supporter of Centro Esperanza and received her teacher training from the current Director of Centro Esperanza many years ago. My helper for La Cometa Lectora (Sylvia) studied Grade 5 with said teacher at the same school we attended on Tuesday—pure coincidence and a good one at that, because I had little idea of where on earth we were going with the Cometa suitcase (Google Maps actually failed me). All I knew is that Sylvia lived in the neighbourhood where the school was located.

b) I was blown away by the enthusiasm that the kids displayed, even the four boys who apparently have ‘ADHD’. 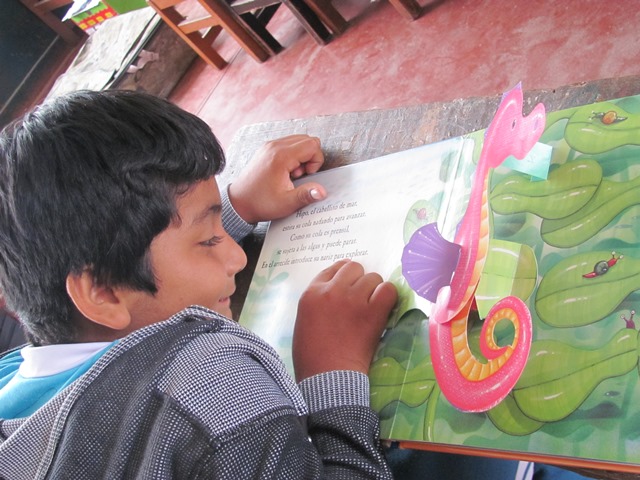 c) I was impressed by the students’ reading comprehension skills and their creative drawings of beach scenes inspired by a group reading of the rhyming Peruvian storybook ‘Lita y Lota: Una olita y una olota’ (‘Lita and Lota: a little wave and a big wave’). 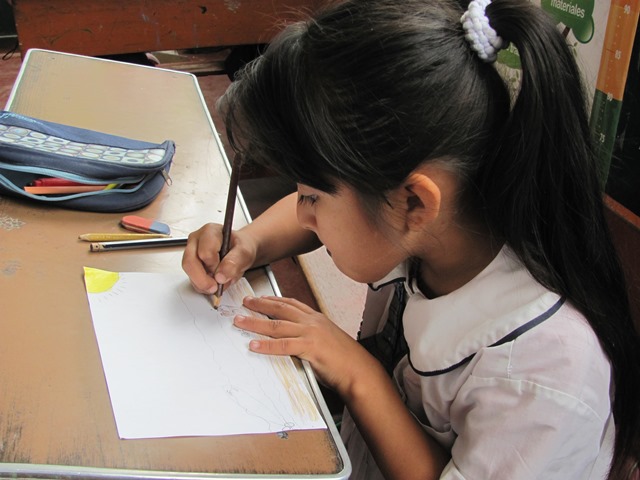 d) As previously mentioned, I was shocked that the kids actually forgot about recess. During recess there were many other students holding soccer balls and jump ropes, staring in the open classroom door with a look of both confusion and near desperation on their faces which read: “and these crazy people, what are they doing inside the classroom when it is recess time!?” I also loved that some teachers came to stare in the doorway and were commenting on how concentrated and happy all the kids looked. 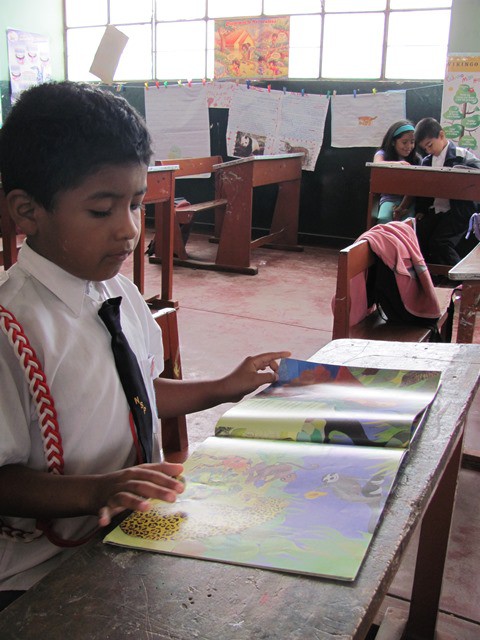 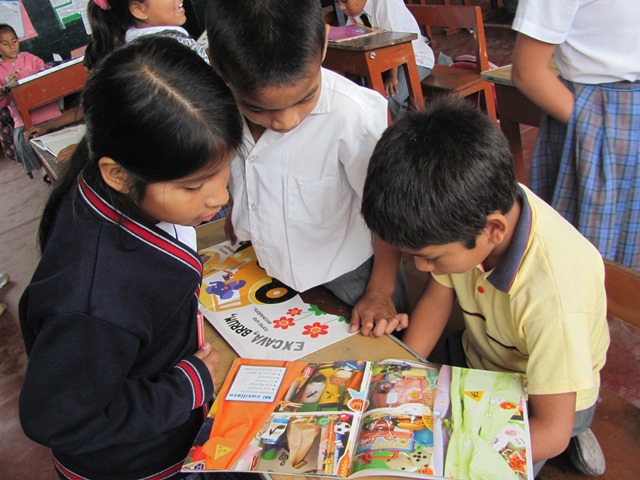 e) I was overjoyed that one girl who ‘never reads’ (according to teacher) was eager to sit and read several story books, all by herself. As we realized, it is not that she isn’t capable of reading, but more likely that she isn’t interested in what she is forced to read at school.

f) I also loved that the little boy who ‘never shares with anyone’ was happy to share several books with his classmates. Thus, I was happy that our ‘rules’ were followed by the kids. The rules are simple: always respect, share and enjoy the books, but please don’t write in them, eat or drink near them or leave them on the floor. 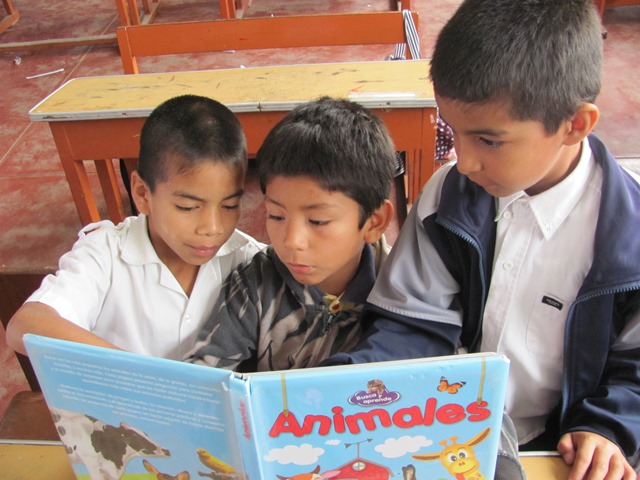 One of these boys is the one who ‘never shares’–and you would never guess.

g) After reminding the kids how fun (and important) reading is and that they will have all summer to play and read, I simply loved that they sang a sweet song for Sylvia and I; it basically goes: ‘the moment to be happy is now’, ‘the place to be happy is here’, ‘you make yourself happy by making other people happy’…
Now: imagine that sung in Spanish by adorable Grade 2 students and you may begin to understand the heart-warming sensation I felt. 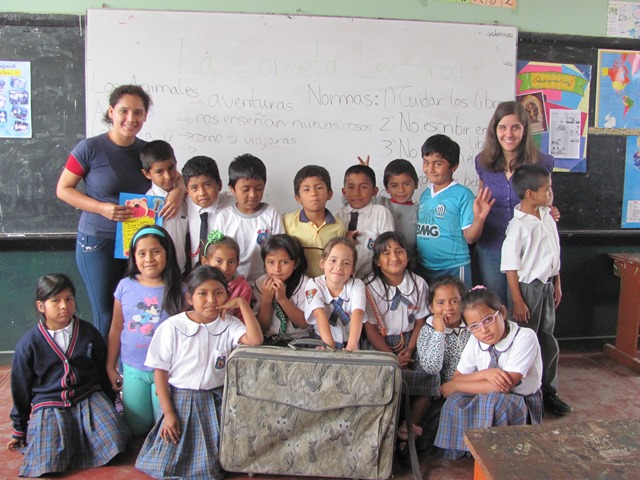 h) The song ended with clapping and a kiss blown by each student to Sylvia and I and was followed by kids practically fighting over who would help us wheel the Cometa suitcase of books to the edge of the school grounds. That was followed by two rounds of really big hugs and kisses… 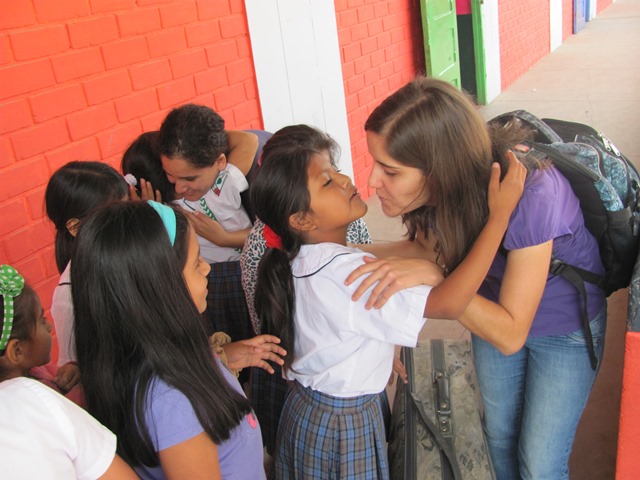 i) Being told by the wonderful teacher who had invited us that she would be teaching the same students next year when they graduate to Grade 3. Which means another Cometa Lectora visit will be possible!

5. Tuesday afternoon, two-minutes after leaving the office: calling my friend Xhio (who is a pro cajón player, although she is a computer science student) and asking if she felt like going to the beach–and hopping on a convi (think hippie van-style bus) less than 40 minutes later with her. Then, digging our feet in the sand on a near-empty beach, talking to seagulls, almost getting soaked by a big wave that took us and others by surprise, and finally watching surfers catch the last waves of the day before the sun set over Pimentel with a vibrant orangey-pink glow. And then remembering once again that Mother Nature rocks. And then getting the best seats in the convi on our trip back to Chiclayo, the ones up front: I sat in between the driver (to my left) and Xhio (to my right) and thoroughly enjoying the tunes of one of my favourite local radio stations a todo volumen (meaning the music was very loud, as per usual in almost any form of Chiclayo transportation, both a blessing and a curse, depending on the radio station).

6. Putting up a giant colour-coded and info-packed map of Chiclayo that Xhio gave me (she saved it from being thrown out)! I can now see exactly where I need to go…and contemplate how it is that I have been to many of the outlying shantytowns ‘pueblos jóvenes’ of Chiclayo as part of my work, but yet have still not set foot in most of them, or in many of Chiclayo’s ‘urbanizaciones‘ (residential areas/neighbourhoods).

* * *
That was only Monday and Tuesday…what a great start to the week it was!
¡Hasta pronto amig@s!