Save the Children event on childhood and adolescence

In December of last year (2014), I made a video to document the launch of the reading promotion program
‘La Cometa Lectora‘ (‘The Reading Kite’) that I helped to implement into Project Chiclayo programs in September.
At last, it is available for viewing on YouTube! (find link here)

The first public viewing of the video occurred on December 5th at an event organized and funded by the non-profit/NGO Save the Children, where attendees included regional government officials and the staff of various NGOs, as well as high school students who had previously presented on problems affecting their communities. During the Centro Esperanza presentation, my boss Gladys spoke about CE’s use of ‘Learning Through Play’ methodology (from the Toronto Hincks-Dellcrest Centre) and then I introduced La Cometa video and let it play. 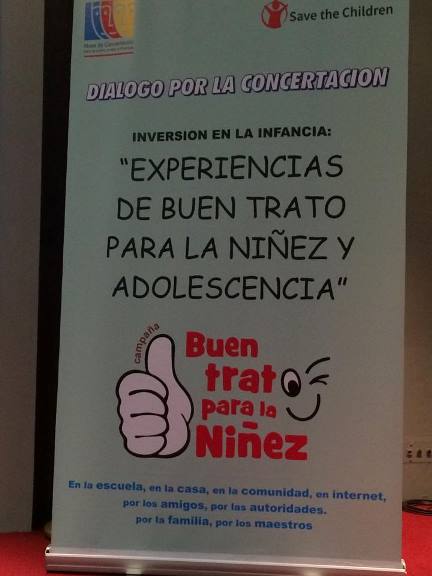 The event banner: Dialogue for Concertation: Experiences of ‘Good Treatment’ for childhood and adolescence. 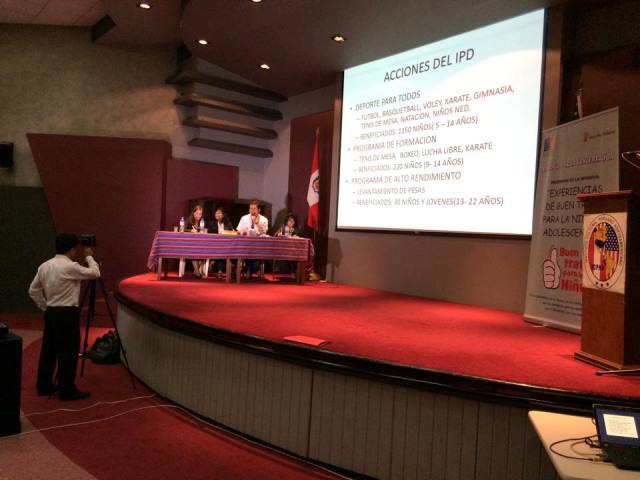 A fellow presenter explaining the support for sports programming that his NGO offers.

Save the Children gifted attendees branded tokens including a pencil case, folder and pen; but the most interesting item was a pocket-sized bilingual Spanish-Quechua version of the UN Convention on the Rights of the Child. I am pleased that a version which serves the grand majority of Peruvians is now available. This is definitely a step in the right direction in a country in which millions of children are living in less-than-ideal conditions for their healthy growth and development.

While Quechua is the most widely spoken indigenous language in Peru, there are many other minority languages, especially in the mountain and jungle regions. Native speakers of these languages are not necessarily literate in them because their languages are traditionally ‘oral’ languages; when they are written, they use letters of the Spanish language (as indigenous languages in Canada are written using English letters). Unfortunately, the formal ‘legal’ language of most UN Conventions makes comprehension difficult for many people, worldwide, especially for Peruvians with an incomplete primary education. I do commend Save the Children for their important effort to make the rights of children known; this is the base of ensuring respect for and protection of their rights and certainly a big step in the right direction, in getting past “official” UN languages.

It is anything but hidden knowledge that many Peruvian children are regularly subject to physical, sexual, verbal and psychological violence, and/or child labour. The last is one which I have been exposed to quite a bit lately. Most children in the working and lower classes in Peru have many more responsibilities at home than the average middle or upper class children in their country (not to mention those in industrialized ones). I support learning about responsibility and work ethic–and helping out at home is perhaps one of the best places to start learning such values; helping a parent sell at a family’s living room convenience store is one thing, but being denied an education and working for hours on end in the busy and dangerous central market, or doing backbreaking labour in the fields, is quite another.

The working conditions in which children may find themselves are usually far from ideal, especially for girls who are additionally subject to the gaze of men with questionable intentions. The tasks children are given can be very demanding, similar to those placed on adults, and may expose them to harmful chemicals, dangerous machinery, abduction, and plethora of other risks.

Knowing how hard it is for uneducated adults to find work (whether formal or informal), it is often necessary that children help contribute to the household income. Unfortunately, students who work many hours have less time to focus on their education, sleep enough, socialize with friends their age, and eat nutritious food at normal hours. It is common for them to drop out of school, especially if they are suffering from malnutrition, a sad reality, one that exists in industrialized countries, too. Knowing the lack of resources and support services available in the slum-areas, I do understand when children/youth say that it seems more productive to work rather than study. Money is a means of immediate survival. Working children are usually very resourceful and intelligent little beings. Although they probably don’t know their official rights, they probably do know that education may be their ticket out of poverty–but they also know that they and their families need to eat and pay rent to survive. It is harder to dream of an ideal existence and plan on how to reach that reality when you are fighting for each new day. 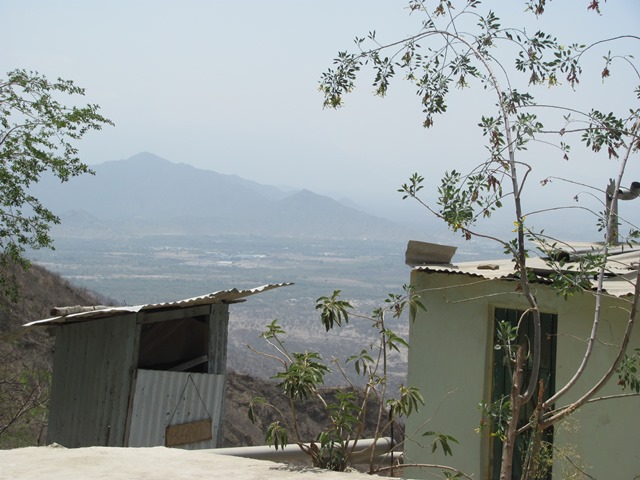 [In line with the global phenomenon, many Peruvian families are leaving rural areas for larger urban areas such as Chiclayo, in search of work. This picture was taken near Motupe, region of Lambayeque, where the main employers are giant fruit processing plants preparing fruit for national and international consumption.]

I have seen presentations about the work being done by a local NGO to address child labour in Chiclayo. They use a model of holistic development and start by working with the family of the child affected and ensuring their school attendance, offering homework help sessions as needed. This NGO offers fun and relaxing art and sport activities for these children, who have long been denied their rights to play and learn and socialize in safe environments with children of a similar age.

Even if they don’t work, many children have no safe place to spend their after school hours. I cannot count the number of times I have seen young children trying to concentrate on their homework while being watched over by their their parents in a market stall. These creative kids will rest their notebook on a box, a overturned bucket ,or their knees as they do their homework, but the noise level and busyness of the market make it anything but an environment conducive to concentration. Free or affordable after school programs are rare (public schools are largely academic institutions and offer few extra-curricular activities); unless relatives, friends or neighbours are available, many parents (mothers in particular) are forced to watch over their children as they themselves continue working. [I was fortunate to have grandparents who picked up my sister and I after school if we had no activities. They took care of us as we played and did our homework until my mother could pick us up after work; I’m sure this was a relief for my parents, and I know parents everywhere wish they had this sort of luxury.]

Like in many other Latin American countries, urban life here is characterized by extremes: a middle-upper class Chiclayan family may have a domestic worker from a rural area (often teenage girls who did not finish their middle or high school studies, or women who leave their own families to be able to earn an income taking care of someone else’s family). While the employer family may provide a small bedroom, these girls and women are usually exploited for long hours, sometimes for far less than minimum wage and usually without healthcare benefits. I once witnessed a local NGO social worker nearly begin shouting at her largely middle-upper class bureaucrat-type audience, telling them to treat their domestic workers as human beings with needs, feelings and dreams. She stressed that it is not just to hire girls without an education and unfair to deny them all but one free day (or half day) a week, which doesn’t allow them to study in adult-education programs or visit their families (if they can afford the bus fare). I liked that this NGO worker was addressing a reality so few people dare to speak about it in such a direct, public manner.

I don’t have any helpful conclusions or solutions, but these are my current observations, that hopefully capture some local realities and challenges that Centro Esperanza faces in our daily work in holistic human development.

2 thoughts on “Save the Children event on childhood and adolescence”